Warfare started with fists, sticks and stones, yelling distance. People usually knew their enemy, not always by name but they could see the fear in his as he bled to death at their feet. Combat was more personal and direct.

As weapons evolved so did the method of using them. With a bow and arrow it was easier to sneak up on the enemy and shoot an arrow in him or throw a spear at him. When groups started waging war on each other new technologies forced them to use different tactics. Armor and shields reduced the effectiveness of bows and arrows.

The Huns for instance would fire arrows at the enemy and ride away when the enemy came after them. In this way they could decimate the enemy ranks without ever being forced to get close to them until the Huns had the advantage. Infantry were butchered by the fast moving horsemen. Of course other factors were involved but a group of aboriginals would have been slaughtered by a group of bow wielding horsemen.

Until the nineteen hundreds, soldiers fought in big formations where Generals could mass their troops where they would do the most damage to the enemy. As guns became more common troops were equipped with them and deployed in several ranks. A bullet fired from a black powder musket could penetrate all but the strongest armor and so massed cavalry charges of knights could be slaughtered by a group of poorly trained peasants armed with guns.

At the time muskets and such were pretty inaccurate but they improved with time. As the weapons became more accurate the ranks of men that were marched around in formation became obsolete except for parades or administration purposes. Now, all a group of men did was make it easier to hit one. 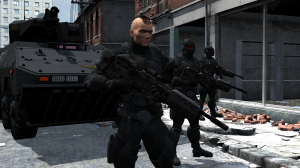 Units started dispersing. Machine guns made dispersion even more important as did grenades and cannon. Explosive shells that could kill a group became even more common and accurate so dispersion was needed to avoid high casualties.

As the explosive radius of bombs increases so does a militaries vulnerability to them. A bomb explodes and sends out shrapnel which can kill as easily as a bullet.

When the atomic bomb was developed, large militaries again realized the danger of concentrating their armies like they once did.

Radios made it easier to call for mortars, artillery, naval gun fire, attack helicopters and fighter craft. As the expense of radios goes down and the reliability increases more radios will be available than ever before.

In Vietnam the VC and North Vietnamese quickly learned that to assemble in large numbers would usually invite artillery, jet fighters, attack helicopters or naval gunfire.

In Desert Storm the allies decimated the Iraqi ranks and infrastructure from the air and sea before the troops ever entered the scene. When troops did move in, the Iraqi’s were confused, hungry and demoralized. Many surrendered and those few that didn’t were quickly killed. For most Allied ground forces it was a one sided fight.

Technology has changed the way war is fought to an incredible extent. With current advances in technology it could change even more. With more widespread and instantaneous media coverage citizens are quickly informed of world events. With vivid, realistic views of what their fellows are facing in distant lands people are becoming less interested in seeing their sons and daughters die in battle. In turn they pressure their government to end the war.

This is starting to have great effect in the way wars are fought. Those in power are, perhaps for the first time in history, beginning to care about the loss of human life. Stand off weapons, that do not risk the lives of citizens are becoming preferred. The cruise missile, which can strike with pinpoint precision is now more important than ever.

One cannot predict the way wars will be fought in the future. With the growing number of weapons of mass destruction one can assume that to avoid the attention of these weapons combat units will be smaller, faster and more evasive. They will not assemble for mass destruction and they will try to avoid detection by the enemy whenever possible.

An orbital satellite can count eggs on a table. How long before they marry a satellite weapon with the imager and use it to attack individuals on the planets surface. Special imagers can detect missile silos and transmit their location to attack units. Of course this is not perfect yet (as Iraqi Scud Missile launchers proved in the Gulf War).

Technology is becoming more precise and lethal. Already, unmanned aircraft are employed by US forces. Right now these are unmanned recon craft, they are working on combat craft. A remote controlled aircraft is less restricted by high gravity forces which can cause a pilot to black out. Without a pilot, remote controlled aircraft have many advantages. If it is shot down you don’t have to worry about a pilot for one. It can maneuver and probably fight better than a manned aircraft and they can be built smaller.

Ground craft are no different. They will not expose friendly troops to danger and because they are unmanned are more expendable.

Anything built by man can be destroyed by man. Burrowing missiles can destroy deep bunkers and satellites can scan and pinpoint almost anything it wants.

Guided munitions can be directed with pinpoint accuracy by US forces and that is today, right now. If a target can be found it can be destroyed.

So what does this mean to someone who wants to write Military Science Fiction? Does it mean the story is obsolete before it has begun? Like somebody writing about a man on the moon or little green men on mars?

No. It means you have to put more thought into your stories and think things through. Nations are not regressing technologically, soon more than the US will have spy satellites and cruise missiles, some already do. These other nations may not be our friends either.

Once we move into space it will be easier to destroy such satellites. Without such pinpoint accuracy available from spy satellites, forces will have to resort to other means to gather information. Even unmanned aircraft can be shot down. Small teams will probably have to be sent in to find targets for the cruise missiles. Stealth will be their best defense.

In Vietnam impressive body counts were scored by elite teams, Marine Force Recon and Army LRRPS (Long Range Recon Patrols) called Lurps patrols. These teams of six to eight men were inserted into enemy territory and given complete control over who fired into their area of operations. If they saw NVA or VC then they would call for artillery or close air support with their radio. The NVA and VC never knew they were there until it was too late in most cases. Despite popular belief these elite units killed more enemy troops with their radios than their hand held weapons.

As warfare moves into space a great many things can change. If a ground based unit can attack a space craft then it would be unlikely a space craft will enter orbit until it is safe. It is highly unlikely space ships will become cheap enough to risk. On the other hand, once a space ship controls orbit (which is a big area) it will be able to destroy targets on the ground with pinpoint accuracy.

Of course this is all theoretical but current technological trends are going this way. The desire to minimize the risk to friendly forces is leading towards more automation and more advanced stand off weapons. It has come to the point that if a target can be seen it can be destroyed.

US policy is starting to lean away from using US troops in hot spots as well. With the technology at its disposal the United States is finding it better to rely on troops from ‘lesser nations’ because they are more expendable and their death would not cause such an uproar in the United States (as would be the case if her own sons and daughters were being killed). In addition if the troops did massacre a number of local noncombatants for whatever reason, again the US would be free from blame.

A lot of weapons could change the way battles are fought. Defense units along borders could conceivable shoot down incoming missiles. Already US ships are equipped with anti-missile devices designed to shoot down airborne targets with high volumes of fire. Anti-missile missiles, similar to the Patriot are available.

Every system has a weakness and strength. Military Policy has been, and will likely always be to minimize the strengths of its equipment and minimize the weaknesses. It is also Military Policy to anticipate National Policy. Wars are always fought over beliefs, the belief that Country A is right, or country B has something that Country A needs. Usually the individual believes his leaders when he/she is told something.

It is unlikely that the Military will regress. One series I read, which I liked despite its flaws, had everyone armed with an energy weapon that had to recharge themselves between shots. While their weapons recharging they fought with swords. I thought it was awfully romantic but I had no clue why some upstart didn’t arm a bunch of his people with ‘ancient’ submachine guns and take over the empire. As far as I saw there was no logical reason not to continue using chemical slugthrowers. To me it was like wooden sailing ships in space because there was no real logical context behind the decisions.

When writing you need to consider how warfare has evolved and where it is going. Elite troops (like Marines, Rangers and Special Forces) are less likely to attack enemy units ‘simply because they are there.’ Long ago they might have, now there are better methods. Some methods, despite historical evidence, are still not used. Small teams are more effective if they avoid engaging the enemy in a firefight and call in artillery or air strikes instead for instance. Of course sometimes a unit might be out of range of artillery or air strikes but now there are cruise missiles and possibly orbital weapons.