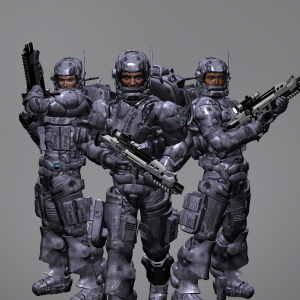 A fireteam is usually the smallest unit sent out on patrol and the team relies more on stealth than combat power because of its small size.

A well balanced combat unit, fireteams are designed to be versatile. The fireteam revolves around the light machine gun. The team leader insures the machine gun is positioned where it can do the most damage to the enemy. If the machine gun cannot fire at an enemy because of a dip in the land, a crater where the enemy is hiding or whatever, the grenadier can lob grenades into the enemy’s location. If the enemy is protected or some reason from the low angle arc of the grenadier the machine gun can provide covering fire while one of the riflemen gets closer and throws a grenade or places a demo charge.

The machine gun is also manned at all times. If a machine gunner is digging a hole, eating or relieving himself he gives the machine gun to someone else and takes their weapon until he is done.

In addition to carrying their own ammunition, each member of the fireteam usually carries extra ammo for the machine gun. Rocket launchers (like the LAW and AT-4) dramatically increase the effectiveness of a fireteam. A long range radio also increases the lethality of the fireteam ten fold because if they can’t destroy it with their already considerable firepower, they can call in artillery, mortars, strike aircraft or reinforcements.

In battle a fireteam, when properly trained and led, is incredibly effective. Armed with machine guns, grenade launchers, anti-tank rockets, hand grenades and a radio a fireteam is the most lethal, single unit on the battle field.

When a firefight begins everyone takes cover and fires at the enemy. The fireteam leader directs the machine gunner to the best position and directs the fireteam to concentrate fire on certain targets (like enemy machine guns or leaders).

If a target cannot be killed by direct fire weapons, the grenadier opens fire.

If the enemy loses the advantage, the fireteam leader may direct his team to advance on the enemy. Depending on the amount of return fire his team is receiving, he may move his team individually or in pairs. He might even move everyone except the machine gunner and once everyone has moved, then he will move his machine gunner (or vice versa).

Basically, anybody moving is supported by accurate fire, whether the person moving is a single person or several, he has people suppressing the enemy while he finds a better position, reloads or carries out some other combat related task.

Unless the fireteam leader retains control over movement, (not an easy task!) movement is like it is for battleteams and individuals.

Each member of a patrolling fireteam adheres to the basics of individual and battleteam patrolling. In addition to those basics, fireteams move in formations. Each formation has a different purpose and is designated anticipating enemy contact. Since it is tiring to move from cover to cover, getting up and down, formations are used. It should be noted that although a formation looks good on paper (or screen) it is not easy to maintain any formation because warriors have to go around objects and don’t pay perfect attention to the formation. Also, when the firing starts most units deploy in a line facing the enemy so everyone can fire freely at the enemy without endangering a friend. Every team leader and squad leader is different so there will be variations according to the whim of the leader. In larger formations more can change so all machine gunners are not on one side, ect. In general, the team leader places himself where he can best see what is happening and so control the unit.

Unit formations are used to control the unit so that firepower is focused more effectively on the enemy. Formations are also used to reduce the confusion and place order on the unit so the commander has more understanding of what is going on. Formations are used by all command levels from fireteam leaders on up. All formations are not set in stone and leaders frequently vary them according to the situation or terrain. The easiest formation to control is when everyone is in a line, then the leader only has to worry about the first person is going. When the unit is online, the leader has a much more difficult time controlling everyone because everyone is looking forward towards the enemy so they don’t get shot. On line, or skirmisher, formations usually look like wavy lines in practice because of terrain, lack of attention or poor visibility.

FIRETEAM WEDGE: When a fireteam is unsure of the enemy’s location a fireteam wedge is the best formation. It maintains a large amount of firepower to the front and makes it more difficult for the enemy to trap the fireteam in a flank position where it’s firepower is severely limited. The machine gun can be placed on either side of the diamond, as directed by the team (or squad) leader. In the five man fireteam the machine gunner is kept in the rear of the formation so he can look over the situation and then deploy to the best location. The machine gunner is never put in front of a formation because the machine gun is heavier and not as easy to maneuver as a rifle. Also the lead man is more likely to come under fire and needs to be more alert, the machine gunner, because of his heavier load, usually tires faster. A tired warrior is not as alert as a fresh one.

FIRETEAM ECHELON: The Echelon is used when the enemy is suspected of being to either side. It can also be used when friendly forces are to the side not being protected against, like when a fireteam is providing flank security for a larger unit. This focuses all available firepower to the side. Firepower to the front is only slightly diminished in favor of protecting against a possible flank attack. When proper spacing is employed, this kind of formation allows each warrior to fire directly forward and to the side without endangering a comrade. Individuals are staggered instead of getting in a strait line to avoid getting in line for an enemy machine gun.

Online/Skirmisher: When the fireteam is attacking, or knows where the enemy is at, the team leader may deploy the team in a line. This focuses all available firepower to the front but leaves the team vulnerable to its flanks. To minimize the danger to a machine gun getting on a flank and mowing everyone down each individual is staggered. While this diagram looks good in theory practice is not this pretty and a line is never perfect. People take cover behind what is available and try to avoid getting in each other’s way. 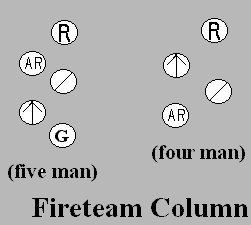 FIRETEAM COLUMN: A Column formation is used when the fireteam is not likely to encounter the enemy. It is also used in thick vegetation or for speed. The column formation is extremely vulnerable to an attack from the front but is well deployed for an attack from either side. Two variations of the column exist. One slightly reduces the vulnerability to a frontal attack so one machine gun cannot kill the entire unit. The other one is best used in very think terrain or at night so people don’t get lost or disorganized. The illustration shows the preferred type of column. On a road for instance the rifleman and Assistant Automatic Rifleman would be on opposite sides of the road. In the less preferred formation, each member is directly behind the other.

In each formation, the fireteam members attempt to maintain as much room as possible so one grenade cannot take out more than one person and a machine gun has more space to traverse to target more people. Another side effect of good dispersion is it reduces visibility for the enemy. It is much easier for the enemy to see a group of camouflaged men than it is to see one or two camaflouged me.

Also by maintaining distance between individuals more ground can be covered. If the team walks into an ambush the dispersion may also mean that fewer people are caught in the kill zone.

The machine gun is of critical importance in the defense. Usually it is deployed along the flattest piece of ground so that it can fire farther along that line effectively. This is called grazing fire. The machine gun bullets graze the ground from one foot up to four feet. Any attackers crossing the machine gun’s path is vulnerable to this grazing fire, even if smoke or weather obscure the machine gunner’s view.

A stake is also used to designate the machine guns FPL, or final protective line. When the enemy is about to over run the unit, the FPF (Final Protective Fire) command will be given. This means the machine guns especially will create a wall of bullets across the units front. Anyone crossing this line will be in severe danger from the machine gun firing as fast as it can. When two or more machine guns use interlocking fields of fire it creates a near impenetrable wall of fire. This makes it doubly important that machine guns be manned.

The grenadier is placed so he can fire into places the machine gun cannot.

Communication in the defense is just as important as in the attack.