Heavier and heavier ‘grenades’ were needed to take out tanks. As tank armor improved, more explosives were needed to defeat it. Eventually the armor grew so tough that a hand held grenade couldn’t take it out and so the launched grenade was developed.

There are a variety of different types of grenade launchers. The more common one these days is the M-203 (40mm) seen attached to the M16-A2 rifle. The Soviets developed a 30mm (and 40mm) variation which appears on some of their assault rifles. The Chinese also have a version that is mounted under their new rifles. 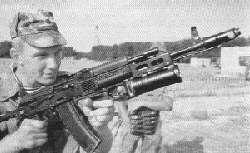 An older type of grenade ‘launcher’ is a grenade that is fitted over the muzzle of the rifle but these are becoming extinct for various reasons. For a long time the RPG (Rocket Propelled Grenade) was the Soviet weapon of choice. The RPG is an excellent weapon with anti-tank capability. US Forces do not have a comparable weapon to the RPG which is in almost every Soviet style squad. The closest US Forces come is the 72mm SMAW (Shoulder launched Multi-purpose Assault Weapon) aka Bunkerbuster which is a Company Weapon.

The RPG as used by the Soviets is a versatile weapon that can be used against low flying helicopters as well as ground targets. Although the RPG lacks the ability to defeat modern western armor it can still cause significant damage, especially to Soviet armored vehicles.

Rifle grenades are a little different than RPGs. Fired almost like a bullet there is not backblast from an RG to give away the shooter’s location and rifle grenades can cause damage, even to armored vehicles. One major advantage of a rifle grenade is the fact that they are an indirect fire weapon, they arc and are an area effect weapon. This gives an infantry squad a kind of low angle mortar. Enemy troops could hide from the machine gunner in a stream bed but the grenadier can lob a grenade into the stream bed with them.

New advances in technology will revolutionize this weapon system even more. The US Army is testing an new weapon that has a 20mm grenade launcher built in. Unlike regular grenade launchers that have only one shot and are breach loaded this new weapon is magazine fed.

The sight system of this new rifle can determine the range to the target and program the grenade to explode at a certain distance. This will allow the grenadier to aim at a fox hole and fire a grenade that will explode as it passes over it, spraying the enemy below with lethal shrapnel.

Presently RG’s ‘lob’ the grenade at the enemy. There are also different types of grenades available for someone with a grenade launcher. Besides various explosives, there are illumination rounds, paint (for training, dangerous if shot at a living target), tear gas, smoke rounds (in various colors), flares, parachutes and buckshot.

Grenades do get heavy, over a pound a piece (40mm) so large numbers are difficult to carry. In Desert Storm I carried close to thirty grenades of various types, mostly HEDP (High Explosive Dual Purpose), all that ammo got real heavy real quick.

RPG: These weapons, mostly of Soviet design, are a versatile weapon. They are rocket launched so they have a backblast. When the rocket ignites it expels gases out the back with explosive force, like a space rocket taking off for orbit. Standing behind someone who is firing an RPG can be fatal depending on the range. Inside an enclosed room shooting out the shooter can be in danger because the explosive gases have nowhere to go.

RPG’s are usually deployed at the squad level and are controlled by the squad leader who the grenadier is never far from. When a mechanized squad is deployed the RPG gunner is supposed to be to the left of, and beside the squad leader. The RPG is used to destroy targets that pose the most threat to the squad, be the target a machine gun or tank.

Although the RPG can be used against a tank, it is usually suicide to attack a tank from the front because that is where the tank’s armor is thickest. Older types of RPG’s frequently lack the power of newer ones. As the Soviets learned in Chechnya, RPG’s make excellent anti-tank weapons.

Chechnya Armor-kill teams were composed of three or four man teams. Each team had an anti-tank gunner (with an RPG-7 or RPG-18) a machine gunner and a sniper. Additional members served as ammo bearers and assistant gunners.

Five or six teams would attack the same tank from basement, second or third floor buildings. Soviet tanks could not fire at these teams because their weapon lacked the ability to aim so far up or down. While the machine gunner and sniper pinned down enemy infantry and made the tank button up, the anti-tank gunner tried to get in a shot at the rear, sides or top of the tank. The armor kill teams would ‘mob’ the tanks preventing the armored vehicles from fighting back effectively.

In Afghanistan, the Mujahideen used RPG’s from mountain tops and fired down on helicopters, killing several.

RPG’s serve a great many roles, especially in a third world army that lacks more specialized weapons. An RPG is basically a beefed up grenade attached to a rocket. RPG’s can be used as indirect fire weapons but this is not a very accurate method.

Rifle Grenades: These are almost a different class from the RPG’s. They are more versatile but not as powerful. In US Army and Soviet style units a soldier is designated as the grenadier. In modern Marine units the Fireteam leader is also the grenadier.

Grenadiers have many functions in the tactical scheme of things. Because of their wide variety of ammunition they can do more than shoot grenades into areas the machine gunner cannot shoot. A grenadier can use smoke grenades to mark the enemy location for machine gunners or attack aircraft (very scary proposition because attack aircraft have powerful munitions and you don’t want to be close when they go off!). Smoke can also signal support units to cease or shift weapons fires.

Illumination rounds can be used at night so the combatants can see each other, or an approaching unit can be identified. Flares and other types of pyrotechnics can be used to signal others in all manner of ways. (Illum and flare type grenades are also real good at starting fires if they hit the ground before they go out!).

Buckshot can be used for close in work to clear a room like a one-shot, shotgun. Buckshot would also be useful for a pointman in the jungle. Tear gas (or some other gas) could be used to disperse a mob of protesters.

Rifle Grenades type 2: These types of rifle grenades are dying out. Originally the rifle grenade was designed to be fired by attaching it to the muzzle of a rifle. A blank round of ammunition was used to fire it. If a live round was used to fire it the results could be disastrous. This type of rifle grenade fizzled out and nobody really considers it a viable weapon any more. One reason it probably fizzled is because the rifle had to be specially modified to accept the grenades. The second reason is because of the danger of using a live round when firing the grenade and the trouble of using a blank.

Essentially a rifle grenade uses the gases from a bullet to propel it at the enemy. Blanks are basically shells without bullets. The explosion of the round propels the bullet (or grenade) forward. If a bullet is used to ‘launch’ a grenade, the bullet might hit the grenade and get lodged in the barrel. The next bullet to be fired might cause the barrel to explode. Or the bullet might cause the grenade to go off (unlikely) or cause it to launch unpredictably or any combination thereof. In the heat of battle it is easy to forget if you have a blank round in the chamber or a real one. If you fire a blank round without a blank firing adapter (or a grenade attached) the weapon will jam.

Simply put this type of grenade launcher is not a simple weapon and can have disastrous results if something goes wrong.

Rate of Fire: Because most grenade launchers are single shot the rate of fire can vary depending on the individual. An M-203 for instance, you just open the tube and the old shell casing falls out so you can insert the new one. Very simple. RPG rounds must be prepped before firing and then inserted into the tube. The second shot must usually be removed from the holster or bag and depending on how accessible it is can slow one down. Laying in the mud and darkness while trying to become one with the planetary core and listening to bullets fly by overhead makes it difficult to get a grenade out of a vest and into your weapon, by feel alone, is not as easy as it sounds.

Overall, propelled grenades are incredibly useful to an infantryman but they do not, nor will they, replace the machine gun. They are another tool that makes it easier to kill the enemy.