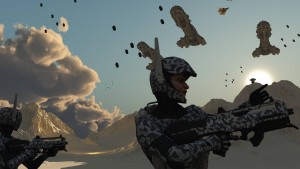 A commando team does not suddenly appear at their objective.

Careful planning must be done to insert a team into the area of operations with a minimum of danger to the team or person. A quiet, stealthy insertion is usually best. Here are some methods of inserting a combat team into the area they will be fighting. This list is not complete but should help get that thought process to work.

ACID RAMMER: A small ‘boat’ that attaches to an enemy ship and uses nano-bots disassemble the hull enough to pull the rammer into the enemy where troops can debark. If done right it can insert a group of Marines onto an enemy vessel without the ship losing atmosphere.

AIR CAV: A one man fighting craft, like a hover cycle that may or may not be enclosed.

AIRCRAFT: The unit is inserted by using something like a helicopter.

ANTI-GRAV POD: Similar to the Grav Bomb the occupant(s) don’t need to fear the high gravity because of anti-grav compensators.

ASSAULT POD: Usually a one way ticket to the destination, designed to be abandoned upon arrival.

ASSAULT SHUTTLE: A shuttle that drops off the troops and returns to the mother ship.

BOAT: The unit is inserted by boat, either small deflatable or something else.

FAST ROPING: A rope is used like a fire pole and the team slides down it into the operations area from a helicopter.

FOLLOW ALONG: A vehicle driving through the area slows down and the team jumps off. Another variation is a team goes with another, (usually larger) team and ‘fades away’ during the patrol. Snipers usually do something like this to get out of friendly lines safely. This way an enemy that is watching the patrol may not know someone has stayed behind.

FOOT: The unit walks into the combat zone.

GHOST SHIP: A ship equipped with a cloaking device inserts the team.

GRAV ‘BOMB’: The trooper(s) are locked in stasis and ‘fired’ at the surface. Very high gravity forces would otherwise pulverize the troopers who are protected by stasis.

HAND GLIDER: Another method that is also becoming obsolete in today’s military but it allows more precision and longer distances to be traversed in regard to parachutes.

IFV SUBORBITAL DROP: An Infantry Fighting Vehicle (one man to a regiment) is released in orbit and does a controlled fall to the surface or it is a fully powered flight. The IFV can help in the fight once they reach the surface and will remain with them.

LADDER: A big ladder is dangled beneath a helicopter and the troops hook onto it.

OPFOR VESSEL: A captured OPposing FORces vessel is used to insert the team into the target area. This works best if the enemy doesn’t know the vessel has been captured.

PARACHUTE: A method that is becoming obsolete in today’s military.

PYRAMID CHUTE: A device being developed by NASA for landings from orbit. It implies four inflatable prongs with a sail stretched between them, like a caltrop. The whole device provides air resistance. For living cargoes it would have to be stabilized or the occupants would likely get very sick. The inflatable prongs would also cushion the landing.

RAPELLING: A slow process where people use a rope to descend from a helicopter or some other vehicle that can hover.

SCUBA: The unit swims ashore and walks. Scuba is usually from a submarine or ship. Submarines are preferred.

SKY HOOK: A balloon holds up a cable. An airplane flies by and grabs the cable in a special nose receptacle yanking the person off the ground. The extractee is then reeled onto the plane. This has been used in the in this day and age although not often.

SPIE RIGGING: The team is dangled from a rope underneath the belly of a helicopter and lowered or retrieved from a drop zone.

STEALTH BOARD/SLED: A small craft that transports the trooper and is hidden to most sensors.

TELEPORT POD: A variation of the assault pod that is teleported into the lower atmosphere past possible orbital defenses.

TRANSPORTER/TELEPORTER: Uses advanced technology to ‘beam’ the team into the combat zone.

WORMHOLE: A stargate or astral tunnel is opened up for the troops to use.

ZERO-G TRANSFER: In deep space the attackers ‘jump’ for it and drift toward their target. Attackers may also be equipped with rocket packs or something.